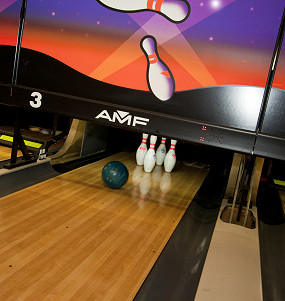 How to play bowling?

Bowling is a team sport that has become one of the most played nowadays. Interactive and competitive, the game requires a lot of technique and handiness in order to be properly played, qualities that can be improved towards exercise and practice! It also implies having fun with friend and/or family and inflicts a positive energy state to you and the ones around you. Nowadays, it is one of the most played games, people preferring to play bowling more than playing on the computer. It is a game that requires inventively an dexterity. It is the game of the century!

How to hold the ball in bowling?

it is very important because holding it properly can change the whole course of the game. Like any sport, it takes practice to play well, but if you take it step by step, you can learn to play. The fundamental step is learning how to hold the ball. If you are holding it for the first time you have to observe the position of the holes and the angles they form with the rest of the ball and between them. The holes are the spots where your fingers will be placed and that is the reason why you will have to acquire them the biggest attention possible.

How to walk the approach?

Walking the approach means finding the proper position between the preparation carpet and the platform, the perfect spot which will determine you’re walking towards throwing the ball. The approach is something that cannot be defined in any other way when it comes to bowling. Dictionary definitions do not require geometrical views and consistency in focusing energy. After all, walking the approach is a complementary issue of aiming and throwing the ball. Approach is a complementary term for aiming your target!

The most common bowling is ten pin bowling. In ten pin bowling, matches consist of each player bowling a "game". Each game is divided into ten "frames". A frame allows a bowler two chances to knock down all ten pins. The number of pins knocked over in each frame is recorded, a running total is made as each frame progresses, and the player with the highest score in his/her game wins the match. Scores can be greater than the actual number of pins knocked over if strikes or spares are bowled. A "strike" is scored when a player knocks down all pins on the first roll in the frame. Rather than a score of 10 for the frame, the player`s score will be 10 plus the total pins knocked down on the next two rolls in the next frame(s). A "spare" is scored when all pins are knocked down using both rolls in the frame. The player`s score for that frame will be 10 plus the number of pins knocked down on the first roll in the next frame. A player who rolls a spare or strike in the last frame is given one or two more rolls to score additional points, respectively.

Bowling shoes are designed to mimic any style of flat shoe from regular dress shoes to athletic shoes. The sole of the non sliding foot is generally made of rubber to provide traction, while the sliding foot`s sole is made of a smooth and flat material that allows a bowler to slide into his release with a rubber heel to allow for braking. Rental shoes are typically leather and rubber on both feet for durability. These shoes can be bought, but most casual players rent the shoes each visit to a facility. Players must be very careful while wearing them that the soft material does not get wet or excessively dirty; if it does get wet or dirty, it will not slide properly, and could damage the approach surface. Depending on the bowling center, shoe rental may be included in the cost of bowling or be added as a separate fee. Use of house balls is included in the bowling price.