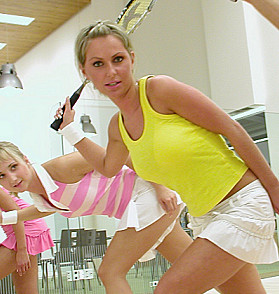 Squash players from Tychy (Poland) win the international squash tournament, “Inter-City Squash Challenge 2008,” being held at “U Przewoznika” club last week! The six-player team from Tychy proves to be better not only from players from Poznan and Warsaw but also those from London or Malta. The individual tournament was divided into two groups, “A” (advanced players) and “B” (club players). Nigel Dunkerley from Malta wins in Group A and Sebastian Lalka wins in Group B.

For three days, the city of Tychy was the place to welcome and host 32 squash players who came to our city to participate in the “Inter-City Challenge Tychy 2008.” The individual tournaments were held on Thursday providing a lot of emotions to start the event with.

Finally, in the presence of a number of fans gathering around the court, Nigel Dunkerley, representing Mars Sports Club from Malta, took the lead winning over Paul Miller representing HAC club, London. Szymon Wolek, Tychy, was the third place winner; then, Rafał Przewoznik and Piotr Wysocki. What is interesting, the fifth place was granted to Dominika Witkowska, the only female winner, representing Squash City from Warsaw. It is worth mentioning that Dominika Witkowska has been an unbeatable squash champion in Poland and the first Polish lady in history who appears on the professional female -squash player list, WISPA.

The most emotional experiences were awaiting the players and fans on Saturday, when the team-player tournament took place. The scores formula works for the most stubborn and industrious teams because the scores gathered by all players counted.

This time the clubs from Malta and London were not successful as the first three places were shared among the players from Poland. The hosts of the tournaments, the “U Przewoznika” team, appeared to be the best. They beat Arena, Poznań and Squash Club, Warsaw. The Tychy team was represented by Rafał Przewoźnik, Szymon Wolek, Piotr Wysocki, Marcin Janik, Seweryn Slanek and Piotr Rys.

The Tychy club was awarded with a gold cup, which they will have to defend for during the consecutive Inter-City Squash Challenge to be held in Mars Sports Club in Malta.